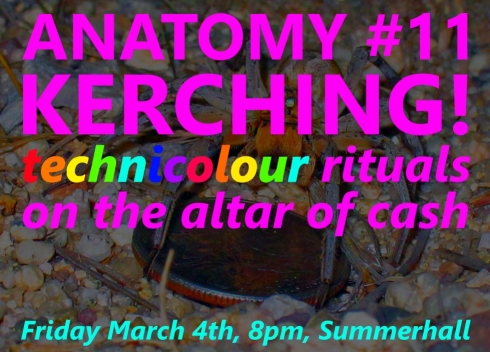 ANATOMY #11: KERCHING!
TECHNICOLOUR RITUALS ON THE ALTAR OF CASH

Mammon is beckoning. Dripping gold, the great god opens his hands and smiles. His teeth are filed to sharp points, and there is a whiff of chocolate on his breath. What have you brought him? A tasty newborn kitten? A ritual dagger? A fizzing stick of dynamite disguised as a sherbet fountain? You might have come to praise or destroy him, but you can never ignore him.

And featuring the Cloud of Unknowing, Do It Theatre, Melanie Jordan, Heather Marshall, Rosa Postlethwaite, Lewis Sherlock, Two Tongue Theatre, and utter nonsense from your bling-dripping hosts, Ali Maloney and Harry Giles, if they haven’t already absconded with the budget.

The Cloud of Unknowing: Palimpsest

A noise and performance interrogation of the writing we’re covered in. A barbaric yawp against the spectre of TOO MUCH INFORMATION. Dance, chatter, distortion, droning, eery silence, bright lights, smoke, dissent!

Circles, Circles, Circles is a Private Play where you are given an original and unique theatre script to read to yourself in an imaginative setting. The script is presented in a limited edition illustrated zine that you can take home after the show. You read the script and experience an innovative form of storytelling, where the illustrations spark the imagination. It’s theatre without mood lighting, music and actors

Circles, Circles, Circles tells the story of an interesting individual who lives with Aspergers Syndrome and has been designed to be experienced by individuals with mental health conditions, but anyone can enjoy.

Death is in the air. I can smell it, swallow it, I’m suffocating on it. Maybe the only way to cleanse it is to start again. Will you come with me? 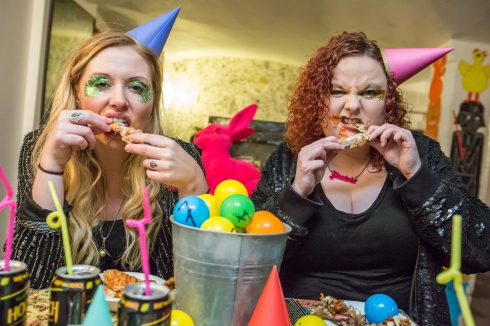 Desperation Bingo is an interactive experience that merges verbatim theatre with our good old seaside favourite Bingo! Just like in traditional bingo audiences are given their card and dabber, the announcer calls eyes down and the balls start rolling….

Desperation Bingo features three performers, one live sound artist and a host of really shit prizes. It’s just for fun. But it might just change your life.

Rosa Postlethwaite: Without Whom We Would Not Be Here Tonight

A list of the benefactors we’re bound to forever. An uneasy expression of thanks and an honest account of where the money came from. Tonight, I not only acknowledge my sponsors but the human cost of our transactions.

This comic, absurd and painfully personal list examines the relationship between honour and wealth. It’s a bespoke performance re-written for each occasion. A process that forces me to think about the consequences of taking the money and running.

I once
believed artistry and facial hair correlated and that to be recognised for my achievements I’d have to have edgy facial features, at least stubble or the showings of a man who could grow a beard well or be
like a real man; like a boxer OR better a
robot boxer all solid and tin.
Basically,
To sum up I used to think that to be a good artist you have to be a robot… an
incredible mass producing, all  fidgeting,  singing, sweating man robot with at least a moustache/ goatee combination. The Creative Scotland Prize Fighter.
The UnderCog.

Nothing like a wild, dark-comedy cabaret blending chanson, dance and a touch of activism to kick off your weekend. These two French fools cross-dress and undress their way to the top in a bid to redress gender inequality! Join them as they hit the glass ceiling. With your help they might just break through … Unless they come crashing down and get their knickers in a twist. Whatever the odds, their mission will be to amuse, provoke and arouse you… The Two Tongue girls will do whatever it takes!