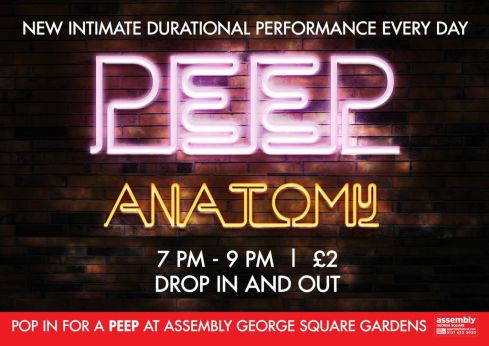 ANATOMY is tickled pink, purple, blue, and every other rainbow colour to announce the line-up for our Edinburgh Fringe début, in collaboration with the extraordinary PEEP venue from Natural Shocks.

PEEP is a brave new space — a small box of wonders with a full programme of theatre, dance, cabaret, sound installation and live art. The audience are seated in private booths peeping on the unfolding show – but the artists can’t see them. It’s a peepshow, but definitely “not for the raincoat brigade” (The Guardian).

Through Keyholes of Flesh is an intimate and unique series of live art installations created bespoke for the PEEP venue. The strange, the wonderful, the grotesque and the eerie mundane. £2 a look – for as little or as long as you want. 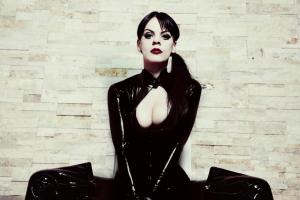 Darkest Fantasy plays with the concepts of subordination and servitude and the ideologies of ownership and entitlement. It explores the female feline and her wild and noncompliant nature. It aims to present the differing struggles and roles that people play and asks if marriage itself is a dark fantasy.

The Second World War, a history recorded and preserved so diligently by its archives, often tells the same mechanized stories we have come to know so well.  Blitz ‘n Pieces unleashes a different war narrative: a raw story of love, sex, loss, death, and destruction amidst the attitude of living for the moment, never knowing what will come next.  Man and Woman, simultaneously agitated and uncaring, tell their sexual fantasies and stories of loss for their hidden audience.  Tired and aware of their cyclical existence and containment within the box, looping images of war, sourced from newsreels and their uncut outtakes, will surround and remind them of their reality.  At once their lives are both concealed and made visible, just as the archive strives to do with the history it contains.

Sarah Rice, a film, art, what nots, and everything enthusiast, is a student currently finishing up her postgraduate education at The University of Edinburgh in the Film in Public Space Programme.  Interested in studies of the archive and the usage of their material through alternative modes of programming and promotion, she hopes to draw together her many curiosities of the past in order to bring reanimated concepts to fresh audiences and venues.  Tom Chambers is an LL.M student at Edinburgh Law School and an alumnus of Fordham University in New York City. While at Fordham he starred in Moonshadow, a film directed by Gia McKenna.

Nest is a durational series of actions that portrays the socially inhibited primitive, animalistic side of humankind. Emeny represents the human as faceless, lacking definition and compelled to be part of the cyclical, hierarchical culture of consuming mass media dogma.

Kimberley Emeny is a heuristic artist and curator based in the North East. She uses her body as a landscape to create symbolic images opposing western concepts of normality, confronting social anxieties and pushing through personal boundaries, using body modification and props. Her performances examine vulnerability, alienation, ritual and sociological ramifications of the female body. Emeny has performed and exhibited around the world at events including Untouchable, curated by Franko B (London), (In)Xclusion (Leeds), La Voce Del Corpo (Italy), ]Performance s p a c e[ (London), The Moving Art Box (Europe) and Tempting Failure (Bristol). Emeny has collaborated with audio-visual filmmakers PussyKrew, creating visuals for HTRK’s world tour and single Synthetik (2011).  Emeny was also the first prize winner of the Departure Foundation North East Art Prize (2012) and has curated events and exhibitions in the North East.

Empress Stah is an internationally renowned, award winning, Aerial Artist, Neo Cabaret Performer and Show Producer, whose signature performance is ‘Swinging from the Chandelier’. Famed for her provocative and controversial style of show, Stah has toured the world with her repertoire of unique acts as well as producing her own sell out cabaret extravaganza’s in London and on tour, most notably  ‘The Very Best of Empress Stah’. Stah has performed for Damien Hirst & Harvey Nichols, shared the bill with Dita Von Teese and Cirque Du Soleil and made guest appearances at The Box in NYC, La Clique and The Brit Awards.

Fetish, Provocation, Petrochemical plastic container manufacturing, Sex, and the Text. Out of the dark comes the words you love; from our handbooks and pamphlets, played with by our tongues, gripped by our microphones, and into your head. Dirty Shade offer a seductive ritual of textual play, surprising eroticisms, the fetishisation of sound and the persuasive pleasure of plastic…

Daniel Hunt is a Nottingham based artist / performer. He is a member of Third Space Studios and teaches on the Drama Programme at Lincoln University. His work centres around the possibilities that forms of collaboration offer the creative performance maker, focussing on techniques and processes of improvisation, and the unique contribution of the performer.  Recent performance work has been presented at (amongst others) Hoopla! at Sugarhouse Studios, London, the Stockton International Riverside Festival, South Hill Park, Bracknell, LIFT Molten Festival, The Whitstable Biennale, and Watch This Space at the National Theatre.  Selina Mosinski is a Performer/Artist currently working with Stipe and Day, a performance collaboration that centres round surreal and fragmented views on contemporary culture, Wayward Company which is in the process of releasing a pilot of a satirical drama based around Nottingham life and Dirty Shade. Previous work has been showcased at Hatch, Reactor Halls and the recently released trailer for the Nottingham book ‘Hello I’m Here.’ She has assisted at a number of Nottingham performance events including platform events at Backlit Gallery and Hatch Nottingham and is currently working with Nottingham Art Organisation.

By harvesting evocative personal moments from her experiences as a British-born Iranian girl who lost and found herself in rock’n’roll dreams, Sara Zaltash has developed Tuul, a trilogy of durational works that sweep sensual motifs of prohibition against fragmented songs of freedom.  The first in this trilogy, “Sweetmud” explores the internalization of prohibition, exhilaration that mimics freedom, and the longing for identity and identification that is trapped between these two. 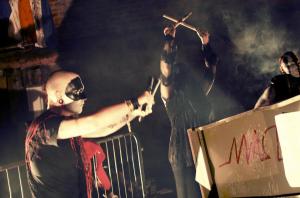 Sexual invokation based upon the supremely dark dialogue and ritual magick from the witches and Lady MacBeth. “Unsex me here!” Live exploration of the previously secret and unseen rituals using Lady MacBeth’s body as black mirror. Scrying blood to divine the past, present and future; Lady MacBeth observes her subconscious. Inspired by the automatic writing/cut up technique made famous by William Burroughs and Brion Gysin, highlander rhythms, dark magick and industrial witchcraft combine to create a primal, visceral and very intense experience only for the strong of heart

Led by Drum Major Russell MacEwan (Test Dept, Ron Athey & Company) and Glaswegian industrialists Black Sun, witness Shakespeare’s MacBeth as you’ve never seen it before – cut up and reworked to black metal standards. Drum Major Russell MacEwan joined TEST DEPT for ‘The Second Coming’, which was set as the centerpiece of Glasgow’s European City of Culture 1990 at the St. Rollox BR Engineering Works, Glasgow, Scotland. The ethos of engagement is a core feature of the ‘Korps and we have members from all aspects of society, from the UK, Europe and USA. Drum Major MacEwan is also a long time member of Ron Athey and Company (US). MacEwan performed in the key Athey triptych ‘Martyrs and Saints’, ‘4 Scenes In A Harsh Life’ and ‘Deliverance’ touring the UK and Europe. “Athey’s work explores challenging subjects like the relationships between desire, sexuality, and traumatic experience. Many of his works include aspects of S&M in order to confront preconceived ideas about the body in relation to masculinity and religious iconography.”

Angela Edwards is an artist, writer and practitioner based in London. She works in Sculpture , painting , film and extreme body art endurance action work. She has performed in venues and events including Tempting Failure Bristol, Performance Space London, and  Torture Garden. Edwards’s first illustrated Grimoire (tantric Brute Grimoire) was published by Aeon Sophia Press 2012. This performance is in collaboration with Alison Rockbrand and Amy Kingsmill, with music by Edgar Kerval.

In the heart of man dwells a beast. Under constant observation through peepholes and CCTV, the Minotaur tries to adapt to his everyday life and physical hindrances. For all his strength, he can’t even go to the toilet without difficulty. The pitiful, legendary, offspring of human and bull, is doomed to be locked in the dark away from normal contact awaiting the day that a hero will come and end his existence.

Calum MacAskill – physical theatre practitioner since 2009, trained in ANIMATION, CLOWN and PUPPETRY. Specialises in mixed media performance.  Has toured with Edinburgh based Plutôt la Vie in By The Seat of Your Pants and A Clean Sweep. Ammie Jay – physical theatre practitioner since 2008. Has performed with Ocean all over in touring Butoh performance Tide Machine. A fully trained theatre technician, has teched for LOOP theatre and The Arches Glasgow. Currently producing A Horse of a Different Colour with Calum MacAskill.

Serious yawping and phallic posturing by female troubadour, she-wolf, and reluctant nun.  This solo show, based on translations of early medieval songs from England, Ireland and the Langue d’Oc, manifest the erotics of grief in all their raw, savage absurdity. 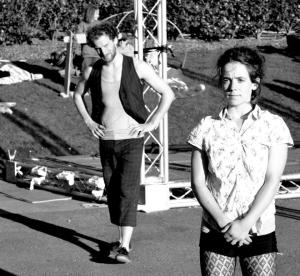 A dynamic new work by 3 home-grown acrobat-dancers. An adventurous and unexpectedly intimate look at the world of 3 mischievous acrobats. Frustration and wonder abound as the 3 explore the opportunities afforded by the limited space. Relationships develop, rivalries come up, chaos ensues. Experimental, improvisational, unique movement is created within the confines of the space, with the opportunity to voyeuristically experience the potential of the human body. 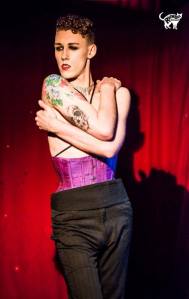 You are invited into the boudoir of Tom Harlow, a perfectly made up male diva. Please watch as he shows you exactly what it takes to achieve glamour and beauty that so many crave. This show continues Tom Harlow’s exploration of male sexuality and masculinity and delves further into male beauty and glamour 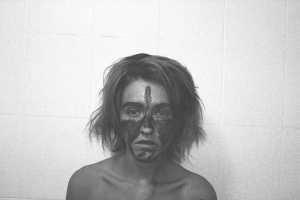 A Serenade for Space Rocks.