In a darkened corner you’ll find a phone. Pick it up and listen to one woman’s fight against fraudulent dealers, isolation, and the apocalypse. Inspired by Byron’s poem ‘Darkness’ and Alan Bennett’s monologue ‘A Lady of Letters’, Darkness was first shown to the public at the CCA in Glasgow for ‘The Pitch’ in February.

Based on Kurt Vonnegut’s Cat’s Cradle, two individuals discuss the potential existence of a substance that could result in the freezing of all the water on Earth. Makeshift Broadcast is currently interested in the possibilities of exploring science and technology through personal narratives, particularly in relation to climate change and sustainability.

A fusion of Contemporary Dance, Waving and Body Popping, exploring subjectivity through movement and poetic narrative. The piece is a choreographic exploration as part of an ongoing research project.

There are no words to convey the utter disembodiment
No spoken language can rectify these wrongs.

Only the Best Need Apply (film)
Written & Directed by David Tinto in collaboration with Up Next Studios
www.davidtinto.co.uk
www.upnextstudios.com

Ruby never imagined that she would be offered a ticket to New Earth; a manmade world populated by only the most exceptional individuals. This extreme dystopian vision acts as a vehicle in exploring the everyday themes of contentment, ambition, self-expression and the meaning of home.

A powerful and intense story focused on the relationship between militant solider, child and observing photographer on the theme of fear and desensitisation within the society. A blend of film and physical theatre, the live performance draws on the core elements of RED, capturing the message, visual and sonic qualities of the film through movement. 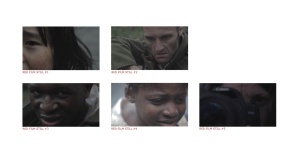 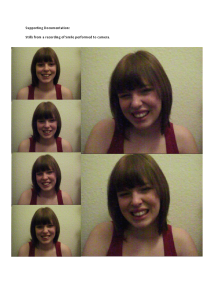 Two flatmates’ vague lives are shattered by the sudden and unlikely appearance of outdoor cooking equipment.

The Other Foreign Body: Camera as Probe
Anna Sadler
http://annasadler.wordpress.com/

The mouth: A place of stuffing food, biting, sucking, eating and kissing is also a place that throws up waste and swallows down cameras, lines and tubes. After contracting e-coli and Haemolytic Uremic Syndrome, I became acutely aware of my insides and created this video that interrogates the unique intimacy within.

Adeline Bourret is an anglo/french multidisciplinary artist based in Edinburgh. Having first trained as a dancer before studying Sculpture, her interest is driven by investigating the similarities and differences between the two subjects. Concepts of body, space, movement and action often take centre stage throughout her work. Her vision correlates elements of performance, theatre design and play.

Katherine McMahon is a poet and theatre designer. She has performed on stages across Edinburgh and further afield, as well as working behind the scenes on many productions and events. She helped to run successful theatre company Theatre Paradok for two years, and continues to work with them. She is also part of the organising team for Inky Fingers, a series of spoken word open mics, events and workshops.